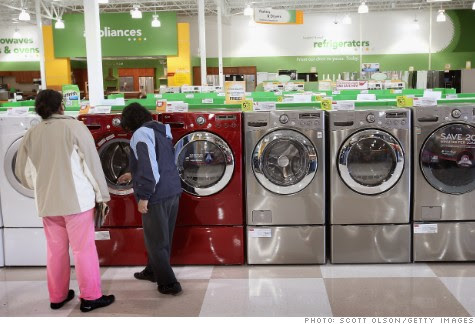 NEW YORK (CNNMoney) -- Consumer confidence in October rose to its highest level in four years, boosted by improvements in the job market.
The closely watched index, which measures how Americans feel about the economy, edged higher to a reading of 72.2 from a downwardly revised 68.4 in September, according to The Conference Board, a business research firm.
It marks the highest level since February 2008, when the country was at the early stages of a long and deep recession.
The reading came in slightly higher than what economists were expecting, according to a Briefing.com consensus.
A key factor behind Americans' optimism, was the improving employment picture. The number of workers reporting that jobs were "plentiful" increased more than 2%. People who are expecting more jobs in the coming months increased to 19.2% from 18.1%.
Related: Obama's recover: a snapshot
This confidence in the job market comes on the heels of a positive report on Thursday, which showed that private sector hiring jumped in October.
These positive indicators land just a day before the closely-watched government's official monthly job report, which gives an expansive picture of national employment. It has taken on increased importance this month because it will give American voters one last snapshot into the health of the job market before the presidential election on Nov. 6.
Posted by Ambang Crystal at 15:34