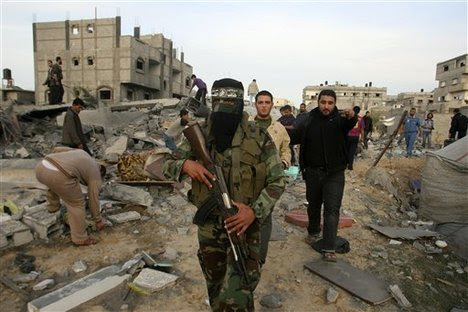 Israel's defence minister Ehud Barak more than doubled his call-up of army reservists last night (Friday night) as its cabinet and military chiefs convened to discuss a ground invasion of Gaza.
With Hamas targeting areas close to the Israeli "red lines" of Tel Aviv and Jerusalem, the government of Benjamin Netanyahu made clear it could not back down against Hamas two months before an election campaign. As the prospect of a ground offensive moved closer, Western leaders urged caution but remained supportive of Israel's position.
Barak said he was giving approval for 75,000 reservists to be enlisted, up from 30,000 on Thursday. Of those, 16,000 are already in uniform, as infantry troops joined rows of trucks, bulldozers and tanks along the border. "The Israeli military continues to strike hard against Hamas and is prepared to expand its action into Gaza," Netanyahu said.
Last night, Lt-Gen Benny Gantz, head of the Israeli army, flew back from visiting troops near the Gaza border to attend a meeting of cabinet ministers and security chiefs.
The targeting of the holy city of Jerusalem with a home-made "M75" missile, which landed in open ground in the West Bank, represented a major escalation in the fighting as the Israeli Defence Force also continued to bombard all parts of the Gaza strip throughout yesterday.
In all, 23 Palestinians have been killed, including 12 militants and six children, according to the most detailed accounts. Three Israelis have died, including a pregnant woman.
William Hague, the British foreign secretary, said: "When Israel has entered into ground invasions in other conflicts that is when they have lost a good deal of international sympathy and support, and of course civilian casualties become much harder to avoid in that situation."
Baroness Ashton, the EU foreign affairs representative, said: "Israel has the right to protect its population from these kinds of attacks. I urge Israel to ensure that its response is proportionate."
Egypt's tentative attempts to broker a ceasefire were undermined by an aggressive speech in Cairo by Mohammed Morsi, the president. "I tell them in the name of all the Egyptian people that the Egypt of today is not the Egypt of yesterday and that the Arabs of today are different than the Arabs of yesterday," he said. "Cairo will not leave Gaza on its own."
The confrontation has now become a diplomatic test on all sides. Hamas, which is an offshoot of the Muslim Brotherhood, is trying to force the newly resurgent Islamist movement to back it more forcefully than the secular dictatorships the Brotherhood has begun to replace across the region, most notably in Egypt and Tunisia.
Egypt is demanding that Israel come to terms with the loss of its former strategic ally, Hosni Mubarak, and adopt a more conciliatory position. Netanyahu is warning all his neighbours that he will not alter his "security first" policies just because their leadership and politics have changed.
Last night, Barack Obama and Turkish Prime Minister Recep Tayyip Erdogan expressed concern that the renewed violence would damage the Middle East peace process. "The two leaders shared their concerns about the dangers to civilian populations on both sides and expressed their common desire to see an end to the violence," the White House said, after the President called the Turkish leader.
Muslim Brotherhood-backed rallies were held in support of Gaza across Egypt yesterday. In Israel, military analysts were divided on the chances of a ground incursion.
"I sensed very little appetite at the outset among the people at the top of the military and around the defence minister," said one source close to leading Israeli officials. "The Iron Dome has been a major success in helping to contain this operation to air strikes."
Posted by Ambang Crystal at 20:11