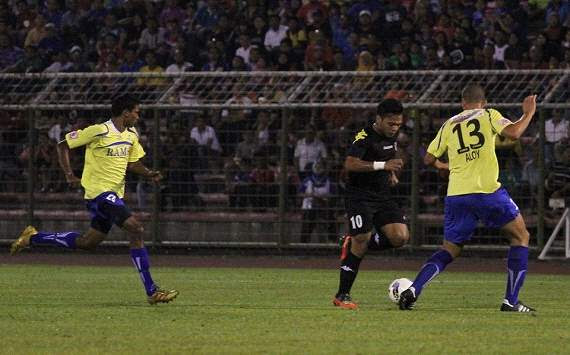 An estimated 20,000 Johor Darul Takzim fans caught a glimpse of their newly-assembled, star-studded side on Wednesday night at the Tan Sri Dato Hj Hassan Yunos Stadium in Larkin, Johor Bahru, as they played in a pre-season quadruple tournament.
Coached by Singapore footballing legend Fandi Ahmad, Darul Takzim were a class above their opponents Woodlands Wellington FC as they ran out 5-1 victors.
Former Spain international Dani Guiza opened the floodgates in the 10th minute via a well-taken freekick, which had Rams goalkeeper Ahmadulhaq Che Omar rooted to the ground.
With Safee Sali partnering the Spaniard upfront, the Woodlands central defensive pair of trialist Oliviera Dos Santos [Brazil] and Manu Lebron [Spain] had their work cut out for them.
Both team slowed down the pace after the goal and were content to pass the ball around while looking for a quick break on the counter.
That was exactly what the hosts did three minutes before the half-hour mark, as Guiza wriggled his way past Armanizam Dolah near the penalty box before threading a precise ground ball to the far post for Safee to tap in the second goal of the night.


The Southern Tigers extended their lead in the first minute of injury time when Safee pounced on a loose ball and sent a rocket of a shot flying into the back of the net from 40 yards.
Woodlands pulled a goal back five minutes after the break as trialist and former Gombak United and Balestier Khalsa player Chang Jo-Yoon scored from 25 yards after some nice footwork from Armanizam Dolah.
The stadium was full of applause and air horns were blared in the 56th minute when Safee gave way to former Kelantan FA striker Norshahrul Idlan Talaha.
The game ended with Darul Takzim adding two more goals in the final 10 minutes courtesy of Malaysia’s national team captain Safiq Rahim and Norshahrul.
Safiq scored from a trademark freekick conceded from the edge of their box eight minutes from time, while Norshahrul took advantage of a defensive mix-up four minutes later to round off a comprehensive victory.
The tournament’s second match between Johor and Pahang FA will be played at the same venue on Thursday at 8.30pm, with the winner meeting Darul Takzim in the final on Friday.
Posted by Ambang Crystal at 18:03