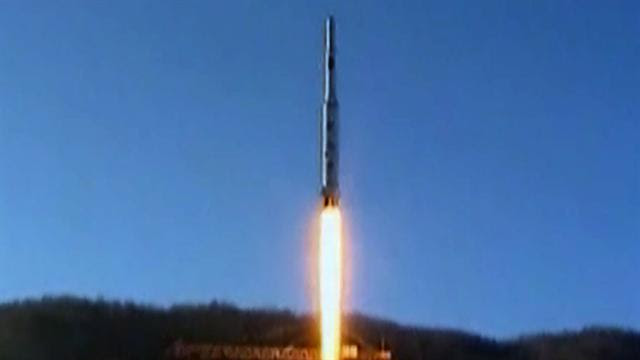 SEOUL - This month's rocket launch by reclusive North Korea shows it has likely developed the technology, long suspected in the West, to fire a warhead more than 10,000 km (6,200 miles), South Korean officials said on Sunday, putting the U.S. West Coast in range.
North Korea said the December 12 launch put a weather satellite in orbit but critics say it was aimed at nurturing the kind of technology needed to mount a nuclear warhead on a long-range missile.
North Korea is banned from testing missile or nuclear technology under U.N. sanctions imposed after its 2006 and 2009 nuclear weapons tests and the U.N. Security Council condemned the launch.
South Korea retrieved and analyzed parts of the first-stage rocket that dropped in the waters off its west coast
"As a result of analyzing the material of Unha-3 (North Korea's rocket), we judged North Korea had secured a range of more than 10,000 km in case the warhead is 500-600 kg," a South Korean Defense Ministry official told a news briefing.
North Korea's previous missile tests ended in failure.


North Korea, which denounces the United States as the mother of all warmongers on an almost daily basis, has spent decades and scarce resources to try to develop technology capable of striking targets as far away as the United States and it is also working to build a nuclear arsenal.
But experts believe the North is still years away from mastering the technology needed to miniaturize a nuclear bomb to mount on a missile.
South Korean defense officials also said there was no confirmation whether the North had the re-entry technology needed for a payload to survive the heat and vibration without disintegrating.
Despite international condemnation, the launch this month was seen as a major boost domestically to the credibility of the North's young leader, Kim Jong-un, who took over power from his father who died last year.
Apparently encouraged by the euphoria, the fledgling supreme leader called for the development and launching of "a variety of more working satellites" and "carrier rockets of bigger capacity" at a banquet in Pyongyang on Friday which he hosted for those who contributed to the lift-off, according to North Korean state media.
Posted by Ambang Crystal at 16:45