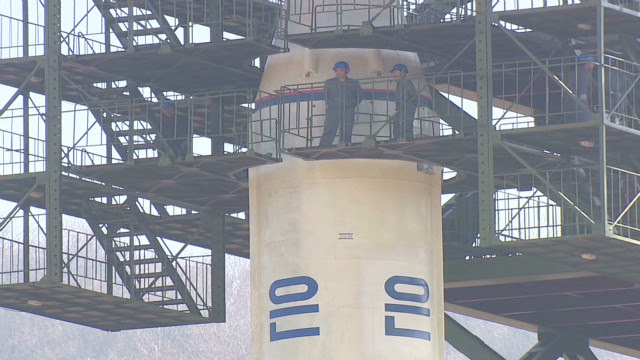 Seoul, South Korea - North Korea has extended the window for a controversial long-range rocket launch by one week after finding technical problems in an engine, state media reported Monday.

The planned launch has been widely condemned by other countries like the United States and South Korea, which say it's cover for testing ballistic missile technology. The North insists the launch is aimed at putting a scientific satellite in orbit.
When it announced its plans on December 1, the reclusive North Korean regime said it intended to carry out the launch between Monday and December 22. But on Saturday, the state-run Korean Central News Agency (KCNA) said the launch may be delayed.
In a new article Monday, KCNA reported that scientists and technicians had "found technical deficiency in the first-stage control engine module of the rocket," citing a spokesman for the Korean Committee of Space Technology.
As a result, they have decided to extend the launch period until December 29, the agency said.
The problem mentioned by the news report suggests the solution may not be "a quick fix," said Jon Ahn of the Aerospace Engineering Department at Sejong University in South Korea.
Analysts have cited a number of possible reasons for Pyongyang's decision to carry out an unprecedented second launch this year, after a failed effort in April, including significant anniversaries related to the reclusive state's ruling dynasty.
Previous launch attempts by the North in 2006 and 2009 also failed to achieve their stated goal of putting a satellite in orbit and provoked international condemnation.
Pyongyang has said the planned rocket launch would be "true to the behests" of Kim Jong Il, the late North Korean leader and father of Kim Jong Un, head of the ruling regime.
Kim Jong Il died on December 17 last year, so the first anniversary of his death falls within the launch window that North Korea has announced.
Experts also speculate that Pyongyang wants this launch to happen before the end of 2012, the year that marks the centenary of the birth of Kim Il Sung, the founder of North Korea and grandfather of Kim Jong Un.
This is the first time North Korea has attempted a rocket launch in winter, and observers say the timing of preparations and the launch itself will depend heavily on weather conditions.
But the snow and freezing temperatures may not be the biggest challenge for the launch, though, according to Ahn of Sejong University.
The main issue is likely to be the separation of the second and third phases of the rocket, which bedeviled the botched launch in April, he said.
North Korea's uneasy neighbors are watching developments closely. Japan has said it will shoot the rocket down if it threatens any part of its territory.
Posted by Ambang Crystal at 22:59