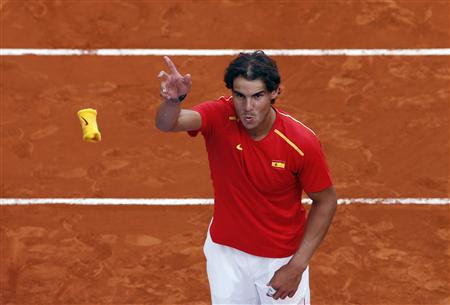 Rafa Nadal starts the final push to what he hopes will be a return to the top of the world rankings when he gets under way at the China Open on Tuesday.
The Spaniard has played only one singles and a doubles match since winning the U.S. Open earlier this month, during a crushing Davis Cup victory over Ukraine, and is re-energized for the final stretch of a season that started under a cloud but has turned into one of his best.
Since returning from a seven-month injury lay-off in February the 27-year-old has been virtually unstoppable, winning 10 titles and compiling a 61-3 record.
Novak Djokovic, who he beat in the French Open semi-finals and in the U.S. Open final, remains number one but with no points to defend between now and the ATP World Tour finals, Nadal looks a strong favorite to climb above the Serb.
It could happen as soon as next Monday if Nadal at least reaches the final in Beijing, even if Djokovic wins the title.
"It will be very tough to become number one," Nadal was quoted on the ATP website (www.atpworldtour.com), although to all intents and purposes the hard work is already done.
"If I am still playing the same way that I have the past couple of months, I hope to have my chance here or in the next few weeks. I am completing a great season.
"I'm playing one of the best seasons of my career. That's why I'm in a good position in the rankings and I had great successes in the important tournaments."
Djokovic has ended the year as number one for the past two seasons but only a Nadal injury relapse looks likely to allow him to make it a third year in succession.
He said he has no complaints about his imminent drop to second, although he will keep fighting.
"With no doubt (Nadal) has had the best results this year," Djokovic said. "This year, he's been the best player in the world. I have been having ups and downs throughout this year.
"But still it was quite a good season for me. But it's not over."
Nadal begins as second seed in Beijing against Colombian Santiago Giraldo while Djokovic faces Lukas Rosol.
World number three Andy Murray is missing having undergone back surgery while former world number one Roger Federer is also absent.
Posted by Ambang Crystal at 01:22