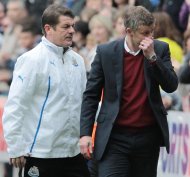 The trap door closed on Cardiff City and Fulham as crushing away defeats condemned both to relegation from the Premier League on Saturday with Sunderland moving to the brink of survival.
Sunderland's surprise 1-0 win at Manchester United meant that Cardiff's 3-0 loss at Newcastle United ensured a return to the Championship for the Welsh club a year after returning to the top flight for the first time since 1962.
Fulham, members of the Premier League since 2001, were thumped 4-1 at Stoke City.
Sebastian Larsson's 30th minute winner for Sunderland at Old Trafford, where Ryan Giggs was in charge of United for the second time, meant Sunderland moved to 35 points, five more than Cardiff and four ahead of Fulham who both have one game left.
Peter Odemwingie, Marko Arnautovic, Oussama Assaidi and Jonathan Walters scored for Stoke while Shola Ameobi, Loic Remy and Steven Taylor were on target for Newcastle who snapped a bad run of form that prompted a fans' protest against manager Alan Pardew and owner Mike Ashley during the game.
Defeat for Norwich City (32) at Chelsea on Sunday would essentially relegate them too.
In an early kickoff West Ham United guaranteed their safety, reaching 40 points with a 2-0 win over 10-man Tottenham Hotspur - their third victory over their London rivals this season.
An own goal by Spurs striker Harry Kane and Stewart Downing's free kick put West Ham in control before halftime after Tottenham defender Younes Kaboul was red-carded for bundling over Downing who was racing towards goal.
Southampton won 1-0 at Swansea City with Rickie Lambert's stoppage time winner while Aston Villa, who began the day not mathematically safe, beat FA Cup finalists Hull City 3-1.
Later on Saturday attention turns to the title race when Manchester City take on fifth-placed Everton knowing a victory would put them top of the table, ahead of Liverpool, who play Crystal Palace on Monday, on goal difference.
Posted by Ambang Crystal at 11:24