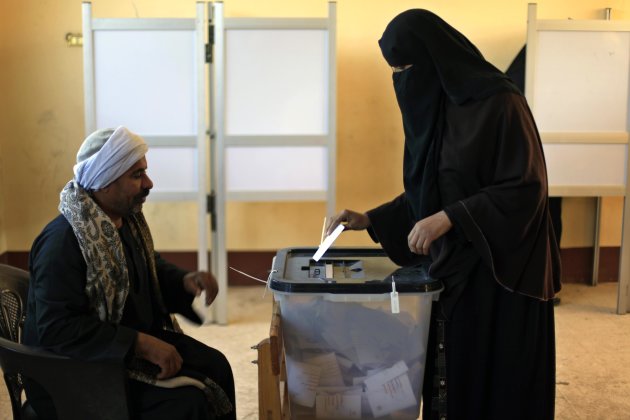 CAIRO — Egypt's Islamist-backed constitution received a "yes" majority in a final round of voting on a referendum that saw a low voter turnout, but the deep divisions it has opened up threaten to fuel continued turmoil.
Passage is a victory for Islamist President Mohammed Morsi, but a costly one. The bruising battle over the past month stripped away hope that the long-awaited constitution would bring a national consensus on the path Egypt will take after shedding its autocratic ruler Hosni Mubarak nearly two years ago.
Instead, Morsi disillusioned many non-Islamists who had once backed him and has become more reliant on his core support in theMuslim Brotherhood and other Islamists. Hard-liners in his camp are determined to implement provisions for stricter rule by Islamic law in the charter, which is likely to further fuel divisions.
Saturday's voting in 17 of Egypt's 27 provinces was the second and final round of the referendum. Preliminary results released early Sunday by Morsi's Muslim Brotherhood showed that 71.4 percent of those who voted Saturday said "yes" after 95.5 percent of the ballots were counted. Only about eight million of the 25 million Egyptians eligible to vote — a turnout of about 30 percent — cast their ballots. The Brotherhood has accurately predicted election results in the past by tallying results provided by its representatives at polling centers.
In the first round of voting, about 56 percent said "yes" to the charter. The turnout then was about 32 percent.
The results of the two rounds mean the referendum was approved by about 63 percent.
Morsi's liberal and secular opposition now faces the task of trying to organize the significant portion of the population angered by what it sees as attempts by Morsi and the Brotherhood to gain a lock on political power. The main opposition group, the National Salvation Front, said it would now start rallying for elections for the lawmaking, lower house of parliament, expected early next year.
"We feel more empowered because of the referendum. We proved that at least we are half of society (that) doesn't approve of all this. We will build on it," the Front's spokesman, Khaled Daoud, said. Still, he said, there was "no appetite" at the moment for further street protests.
The new constitution would come into effect once official results are announced, expected in several days. When they are, Morsi is expected to call for the election of parliament's lawmaking, lower chamber no more than two months later.
In a sign of disarray in Morsi's administration, his vice president and — possibly — the central bank governor resigned during Saturday's voting. Vice President Mahmoud Mekki's resignation had been expected since his post is eliminated under the new constitution. But its hasty submission even before the charter has been sealed and his own resignation statement suggested it was linked to Morsi's policies.
"I have realized a while ago that the nature of politics don't suit my professional background as a judge," his resignation letter, read on state TV, said. Mekki said he had first submitted his resignation last month but events forced him to stay on.
The status of Central Bank Governor Farouq el-Oqdah was murkier. State TV first reported his resignation, then soon after reported the Cabinet denied he has stepped down in a possible sign of confusion. El-Oqdah, in his post since 2003, has reportedly been seeking to step down but the administration was trying to convince him to stay on.
The confusion over el-Oqdah's status comes at a time when the government is eager to show some stability in the economy as the Egyptian pound has been sliding and a much-needed $4.8 billion loan from the IMF has been postponed.
Over the past month, seven of Morsi's 17 top advisers and the one Christian among his top four aides resigned. Like Mekki, they said they had never been consulted in advance on any of the president's moves, including his Nov. 22 decrees, since rescinded, that granted himself near absolute powers.
Those decrees sparked large street protests by hundreds of thousands around the country, bringing counter-rallies by Islamists. The turmoil was further fueled with a Constituent Assembly almost entirely made up of Islamists finalized the constitution draft in the dead of night amid a boycott by liberals and Christians. Rallies turned violent. Brotherhood offices were attacked, and Islamists attacked an opposition sit-in outside the presidential palace in Cairo leading to clashes that left 10 dead.
The turmoil opened up a vein of bitterness that the polarizing constitution will do little to close. Morsi opponents accused him of seeking to create a new Mubarak-style autocracy. The Brotherhood accused his rivals of being former Mubarak officials trying to topple an elected president and return to power. Islamists branded opponents "infidels" and vowed they will never accept anything but "God's law" in Egypt.
Both rounds of voting saw claims by the opposition and rights groups of voting violations. On Saturday, they said violations ranged from polling stations opening late to Islamists seeking to influence voters to say "yes." The official MENA news agency said at least two judges have been removed for coercing voters to cast "yes" ballots.
The opposition's talk of now taking the contest to the parliamentary elections represented a shift in the conflict — an implicit gamble that the opposition can try to compete under rules that the Islamists have set. The Brotherhood's electoral machine has been one of its strongest tools since Mubarak's fall, while liberal and secular parties have been divided and failed to create a grassroots network.


In the first post-Mubarak parliamentary elections last winter, the Brotherhood and ultraconservative Salafis won more than 70 percent of seats in the lower chamber, which was later dissolved by a court order. The opposition is now betting it can do better with the anger over Morsi's performance so far.
The schism in a country that has for decades seen its institutions function behind a facade of stability was on display in Saturday's lines of voters.
In the village of Ikhsas in the Giza countryside south of Cairo, an elderly man who voted "no" screamed in the polling station that the charter is "a Brotherhood constitution."
"We want a constitution in the interest of Egypt. We want a constitution that serves everyone, not just the Brotherhood. They can't keep fooling the people," Ali Hassan, a 68-year-old wearing traditional robes, said.
But others were drawn by the hope that a constitution would finally bring some stability after nearly two years of tumultuous transitional politics. There appeared to be a broad economic split, with many of the middle and upper classes rejecting the charter and the poor voting "yes" — though the division was not always clear-cut.
In Ikhsas, Hassan Kamel, a 49-year-old day worker, said "We the poor will pay the price" of a no vote.
He dismissed the opposition leadership as elite and out of touch. "Show me an office for any of those parties that say no here in Ikhsas or south of Cairo. They are not connecting with people."
In the industrial working class district of Shubra El-Kheima just north of Cairo, women argued while waiting in line over the draft charter.
Samira Saad, a 55 year old housewife, said she wanted her five boys to find jobs.
"We want to get on with things and we want things to be better," she said.
Nahed Nessim, a Christian, questioned the integrity of the process. "There is a lot of corruption. My vote won't count." She was taken to task by Muslim women wearing the niqab, which blankets the entire body and leaves only the eyes visible and is worn by ultraconservative women.
"We have a president who fears God and memorizes His words. Why are we not giving him a chance until he stands on his feet?" said one of the women, Faiza Mehana, 48.
The promise of stability even drew one Christian woman in Fayoum, southwest of Cairo, to vote "yes" — a break with most Christians nationwide who oppose the draft. Hanaa Zaki said she wanted an end to Egypt's deepening economic woes.
"I have a son who didn't get paid for the past six months. We have been in this crisis for so long and we are fed up," said Zaki, waiting in line along with bearded Muslim men and Muslim women wearing headscarves in Fayoum, a province that is home to both a large Christian community and a strong Islamist movement.
The scene In Giza's upscale Mohandiseen neighborhood was starkly different.
A group of 12 women speaking to each other in a mix of French, Arabic and English said they were all voting "no."
"It's not about Christian versus Muslim, it is Muslim Brotherhood versus everyone else," said one of them, Shahira Sadeq, a Christian physician.
Kamla el-Tantawi, 65, said she was voting "against what I'm seeing" — and she gestured at a woman nearby wearing the niqab.
"I lose sleep thinking about my grandchildren and their future. They never saw the beautiful Egypt we did," she said, harkening back to a time decades ago when few women even wore headscarves covering their hair, much less the black niqab.
Many voters were under no illusions the turmoil would end.
"I don't trust the Brotherhood anymore and I don't trust the opposition either. We are forgotten, the most miserable and the first to suffer," said Azouz Ayesh, sitting with his neighbors as their cattle grazed in a nearby field in the Fayoum countryside.
He said a "yes" would bring stability and a "no" would mean no stability. But, he added, "I will vote against this constitution."
Posted by Ambang Crystal at 16:48