Wales striker Craig Bellamy will retire from international football at the end of the World Cup qualifying campaign next week, the 34-year-old said on Tuesday.
Bellamy, who plays for home-town team Cardiff City after spells at a number of Premier League clubs including Liverpool, will step down from the national side after next Tuesday's final qualifying match against Belgium.
He has won 76 caps for Wales and scored 19 goals since making his debut against Jamaica in 1998.
"Players come and go and my career has definitely come and gone," he was reported as saying by the BBC.
"I have to do what's best for the national team and this group of players are the future. The next qualifiers, two-odd years, I'm not going to see it."
Wales, who cannot qualify for the tournament in Brazil, play Macedonia in Cardiff on Friday. If Bellamy picked up a booking he would miss the second match against Belgium through suspension.
The former captain is the third most-capped Welsh player and his country's fifth highest-scorer.
"I'm just grateful for every game I've been lucky enough to play for my country, and I really mean that," he said.
"It's an honour to play for your country at any level at any sport.
"(Playing) 70-odd times, it's been the best. Even the disappointments, even the lows, even the times I didn't want to play again because sometimes defeats can do that to you.
"It will be hard to let go."

Posted by Ambang Crystal at 23:46 No comments:

Wall Street edges lower as a little progress made in Washington 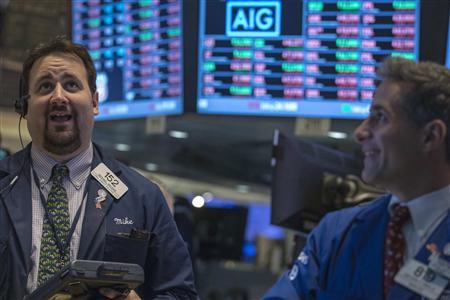 U.S. stocks dipped slightly on Tuesday despite signs of slight progress to resolve the fiscal standoff in Washington, although no agreement appeared to be likely soon.
With the partial U.S. government shutdown in its second week and only nine days left for Congress to raise the U.S. debt ceiling, President Barack Obama said he would accept a short-term increase to avoid a default.
A Senate aide said Republican Senator Rob Portman, who is influential on budget matters, floated a plan to cut federal spending and reform the U.S. tax code as part of a broader deal to reopen shuttered government agencies and raise the debt ceiling.
"In this type of environment, pre-earnings season where it is headline driven by a market bludgeoned with continued sound bites about the shutdown, it's not a surprise to see markets make these smaller moves," said Sal Arnuk, co-manager of trading at Themis Trading in Chatham, New Jersey.
"What is really at stake is a tug-of-war going on because investors don't know if they want to avoid getting caught up in a crisis-driven selloff versus missing a resolution rally."
The shutdown has led to few economic data releases, leaving investors to focus on the earnings-reporting season. However, earnings are more likely to affect individual companies than drive market-wide moves.
After Tuesday's market close, former Dow component Alcoa Inc (AA.N) will report earnings as will KFC parent company Yum! Brands Inc (YUM.N).
The longer the government shutdown continues, the greater the damage to the economy, according to analysts, increasing the probability the Federal Reserve will leave its stimulus measures in place.
The Dow Jones industrial average .DJI fell 39.96 points or 0.27 percent, to 14,896.28, the S&P 500 .SPX lost 3.68 points or 0.22 percent, to 1,672.44 and the Nasdaq Composite .IXIC dropped 7.077 points or 0.19 percent, to 3,763.3.
McKesson (MCK.N) shares rose 5.7 percent to $136.99 as the best performer on the S&P 500 after Dow Jones Newswires reported the company was in advanced talks to take over Celesio (CLSGn.DE) in a possible 3.74 billion euro ($5.08 billion) deal.
PHH Corp (PHH.N) is exploring splitting up its mortgage and auto fleet leasing businesses and selling each of the units, three people familiar with the situation told Reuters on Monday. Its shares fell 2.5 percent to $25.26.
J.C. Penney Co Inc (JCP.N) rose 2.5 percent to $7.90 after the struggling retailer reported a smaller decline in same-store sales for September compared with August and said it was seeing positive signs in many areas of its business.
U.S.-listed shares of Talisman Energy Inc (TLM.N) advanced 2 percent to $13 after activist investor Carl Icahn said he had purchased about 61 million shares of the underperforming Canadian oil producer and may seek a seat on the company's board.

Posted by Ambang Crystal at 23:40 No comments:

Ghana have asked FIFA to move the venue of their World Cup qualifying playoff second leg next month away from Egypt because of "grave" safety concerns.
"Following recent political unrest in the North African country which has claimed innocent lives, the Ghana Football Association (GFA) has asked FIFA to take a look at the security situation of that country and re-evaluate the decision to host the game in Cairo," it said in a statement on Tuesday.
In a letter sent to soccer's ruling body on Monday the GFA expressed concern at "the deteriorating security situation in Egypt" and asked that the second leg of the playoff on November 19 be switched "to a safe and secure venue".
"(We are) gravely concerned that for the past two years Egyptian authorities have only allowed football matches to be played without spectators yet Ghana has reportedly been asked to play in Cairo before fans," the letter said.
Egypt have, on occasion, allowed restricted crowds to watch national team games and African club competition matches since heavy restrictions were imposed after 74 people died in last year's Port Said stadium disaster.
"We are seriously concerned about the security and safety of our delegation and spectators ... as events in the country pointedly indicate that our delegation could be exposed to danger as the violence and insecurity in the country continues relentlessly," the letter said.
Since the overthrow of President Mohamed Mursi in July, the only football in Egypt has involved the national team and two clubs - Al Ahli and Zamalek - in the group phase of the African Champions League.
However, all home games have been hosted in the Red Sea resort of El Gouna because authorities banned matches from major centres.
The restriction has been lifted for the playoff against Ghana in a compromise by the military government that reflects the desire in Egypt to qualify for the World Cup for the first time since 1990.
Posted by Ambang Crystal at 23:38 No comments:

New Zealand will play a friendly against Mexican first division side Queretaro in preparation for a potential playoff with Mexico for a berth at the 2014 Worlds Cup finals in Brazil.
New Zealand qualified as Oceania winners for the two-leg playoff in November against the team finishing fourth in the CONCACAF region with Mexico in fifth place facing a desperate fight to get to Brazil.
The top three in the six-nation final CONCACAF group go through to the finals with the United States and Costa Rica having already booked their tickets.
Honduras are third, three points ahead of Panama and Mexico, who have an inferior goals record to the fourth-placed Panamanians.
Mexico host Panama at the Azteca in Mexico City on Friday looking for their first win in five home qualifiers before visiting Costa Rica four days later.
Queretaro are in eighth place in Mexico's Apertura championship with four matches to go to the title playoffs for which the top eight qualify.
The match will be played at Queretaro's Corregidora stadium on Saturday.
Posted by Ambang Crystal at 23:36 No comments: