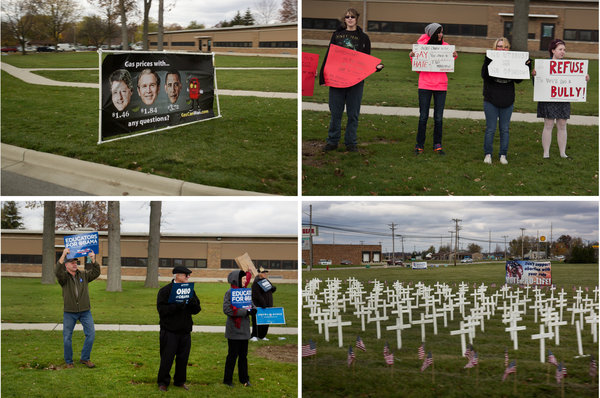 TOLEDO, Ohio — The ad from Mitt Romney showed up on televisions here early Saturday morning without the usual public announcement that both campaigns typically use to herald their latest commercials:  Chrysler a bailout recipient, is going to begin producing Jeeps in China, an announcer says, leaving the misleading impression that the move would come at the expense of jobs here.

The data comes in a week when euro zone finance ministers are due to confer by telephone about further aid to the faltering Greek economy, and heads of the major global economic agencies are holding meetings with the leaders of France and Germany.
Spain’s gross domestic product contracted by 0.3 percent in the third quarter from the second quarter, the National Statistics Institute reported from Madrid.
The Spanish economy has now contracted for four consecutive quarters. A collapse real estate prices after the 2008 financial crisis and austerity measures to balance the public sector budget have inflicted severe pain on the country, driving unemployment to 25 percent.
In Nuremberg, the Federal Labor Agency said the number of Germans without jobs rose in 20,000 after seasonal adjustment, leaving the unemployment rate at 6.9 percent, unchanged from September.
“The weaker economic development is making itself noticeable in the labor market,” Frank-Jürgen Weise, director of the German Federal Employment Agency, told a press conference in Nuremberg. But he added that “overall, the labor market is showing itself to be robust and in fine condition.”
Eckart Tuchtfeld, an economist with Commerzbank in Frankfurt, noted that, perhaps more worryingly, the number of employed fell in September for the first time since early 2010.
“The ‘labor market miracle’ many observers had proclaimed is likely to continue taking a breather for now, in view of the poor economy,” Mr. Tuchtfeld wrote. “Only in the second half of 2013 do we expect the trend to point up again.”
The Spanish and German gloom were underscored by a repor from the European Commission which said in Brussels that its index of business and consumer sentiment fell 0.7 point to 84.5 this month from a revised 85.2 points in September.
An index value below 100 shows more respondents are pessimistic than optimistic.
“Marked decreases” in sentiment in the euro zone’s industrial and construction sectors outweighed improvement in retail, though service sector and consumer confidence were stable, the commission, said, though it noted a hopeful sign in that the rate of decline in the indexes was slowing.
Sentiment in the 27-nation European Union was “broadly stable,” the commission said.
The decline in sentiment shows the 17-nation euro zone began the fourth quarter “on a very weak note,” Jennifer McKeown, an economist in London with Capital Economics, wrote in a note. She said the sentiment data were “consistent with annual contractions in euro-zone G.D.P. of around 2.5 percent. That implies very steep quarterly falls in G.D.P. in the next few quarters.”
She also predicted the euro zone economy would shrink by about 2.5 percent next year.
More than three years after Greece’s disclosure that it had been fudging its government finance statistics, touching off a run on the sovereign debt of several euro zone governments, the region’s crisis has become a grinding, chronic affair.
Chancellor Angela Merkel will hold talks in Berlin on Tuesday with the leaders of the Organization for Economic Cooperation and Development, the International Monetary Fund, the World Bank, the World Trade Organization and the International Labor Organization.
The leaders were arriving in Berlin from Paris, where they held talks with the French president, François Hollande.
The meeting comes ahead of the latest report on Greece’s financial situation by the so-called troika of international lenders: the I.M.F., the European Central Bank and the European Commission. Germany has made the troika report a precondition for making any decisions on further assistance to Athens.
Nevertheless, discussion over how Germany might best help Greece to cover its growing financing gap has gathered speed in recent days. While the idea that Greece might need more time to pay back its debts remains open for debate among German lawmakers, both the chancellor and her finance minister have rejected the idea of a taking a loss on official loans to Greece.
Ms. Merkel’s spokesman, Steffen Seibert, told reporters on Monday that a write-off of Greece’s public sector debts was “out of the question.” He cited German law as stipulating that loans can only be granted to countries that are not considered in threat of default, meaning that such a write-down “would certainly not be in Greece’s interests.”

Posted by Ambang Crystal at 22:52 No comments:

TOKYO — The Japanese central bank announced fresh measures on Tuesday to ease monetary policy, stepping up its bid to fend off recession in the world’s third-largest economy after the United States and China.
The Bank of Japan, under pressure from the government to act more decisively to halt the economy’s slide, said in a statement that it would add ¥11 trillion, or $138.5 billion, to an asset-buying program that has become its main monetary policy tool.
The bank will also set up a new loan program to supply banks with cheap long-term funds, a bid to pump more money into the Japanese economy to encourage growth. As expected, the bank decided to keep its benchmark interest rate at a range of 0 percent to 0.1 percent.
The Bank of Japan’s governor, Masaaki Shirakawa, said that the easing measures would stay in place until Japan achieved an inflation level of at least 1 percent.
The measures come as Japan confronts economic data that suggest its fragile recovery is threatened. The economy grew at a healthy clip earlier this year, helped by the huge reconstruction effort that followed the 2011 earthquake and tsunami. But a slowdown in exports and industrial output, brought about by the global slowdown and a continued territorial spat with China, a major trading partner, is threatening to hobble that growth.
The dispute, which intensified in September, has led to boycotts of Japanese brands among Chinese consumers, forcing Japanese exporters to scale back their sales forecasts in an important market.
Meanwhile, Japanese industrial output fell by 4.1 percent in September from August, and by 8.1 percent from a year earlier, data released Tuesday showed. Exports have also shown signs of a slowdown, and price data show the economy remains mired in deflation, a damaging drop in prices, wages and profit that hampers economic activity.
Reflecting those risks, the central bank cut its own economic and price forecasts, saying it was unlikely to meet a goal of reaching 1 percent inflation by the fiscal year ending March 2014. That probably will not happen until the following year, the bank said.
“Japan’s economy is expected to level off more or less for the time being. Thereafter, however, as domestic demand remains resilient on the whole and overseas economies gradually emerge from the deceleration phase, the economy is expected to return to a moderate recovery path,” the bank said in its semiannual economic outlook, also released Tuesday.
And in a rare joint statement, the government and the Bank of Japan said they shared the goal of beating deflation. The central bank will “regularly” report its outlook on prices to the cabinet, while the government will introduce its own measures to fight deflation, the statement said.
Mr. Shirakawa said that for now, he saw increased risks for a marked slowdown in the global economy. The biggest change since the bank’s policy meeting in September, he said, was that “overseas economies seemed to be slowing down further.” That was “a big starting point” of the bank’s policy discussions, he said.
It is still unclear how far the bank will go to reverse Japan’s decade-long deflationary malaise, made worse by the country’s shrinking population. Central bankers have said that monetary policy is not enough to ease the economic problems and that the government needs to do more to facilitate growth.
Even as the central bank has flooded the economy with money, bank lending has hardly risen because companies do not feel confident enough in the weak economy to fund big investments.
The government has also thrown money at the economy, approving ¥422.6 billion in emergency spending just last week. But its ability to spend its way to economic growth is limited by a public debt burden already twice the size of its economy. Gridlock in Parliament is also blocking a bill that would allow the government to fund an almost ¥40 trillion deficit, threatening public services.
Markets were unimpressed with the central bank’s moves Tuesday, with the Nikkei 225-share index in Tokyo closing down nearly 1 percent shortly after the bank’s announcement, and the Hang Seng index in Hong Kong off 0.4 percent. The yen strengthened, hitting a one-week high of 79.25 to the dollar, bringing more pain to Japanese exporters.
“Monetary fireworks displays are not in Bank of Japan governor Shirakawa’s nature,” Nicholas Smith, Japan strategist at CLSA Asia-Pacific Markets, said in a note to clients after the bank’s decision. The bank will continue to face pressure from the government to step up its actions, and Mr. Shirakawa may be replaced when his current term ends in April, Mr. Smith said. “And if there is one thing that all major political parties can agree on, it is that the monetary future must be expansionary,” he said.
Posted by Ambang Crystal at 22:41 No comments: