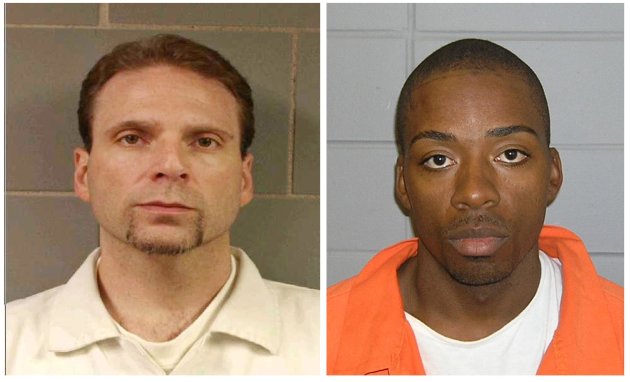 Associated Press/FBI,HOPD - This undated photo provided by the FBI shows , Kenneth Conley, left and Jose Banks two inmates who escaped from the Metropolitan Correctional Center in downtown Chicago Tuesday, Dec. 18, 2012. Chicago Police Sgt. Michael Lazarro says their disappearance was discovered at about 8:45 Tuesday morning. Lazarro says the pair used a rope or bed sheets to climb from the building.

CHICAGO — Two convicted bank robbers who pulled off a daring overnight escape from a high-rise Chicago jail had changed from their prison garb by the time they hopped into a cab near the lock-up, investigators said Wednesday as they expanded their manhunt for the men.
Authorities were raiding houses and combing through records looking for anybody with ties to the inmates who climbed out a jail window and descended 20 stories using a makeshift rope.
The FBI said surveillance footage from a camera near theMetropolitan Correctional Center shows Kenneth Conley andJoseph Banks getting into a cab around 2:45 a.m. Tuesday — about four hours before workers spotted the rope dangling from the federal jail. The pair had changed from their orange jail-issued jumpsuits into light-colored pants and shirts, the FBI said.
"We don't know if they fashioned their own clothes, or what," said Special Agent Frank Bochte.
The FBI was offering a $50,000 reward for information leading to the apprehension of Conley and Banks, with the manhunt focused mainly on Chicago and its suburbs.
Law enforcement officials said at least three homes in the suburbs south of Chicago where one of the inmates once lived were searched Tuesday, and a suburban strip club where Conley once worked confirmed that investigators had visited.
Investigators believe the men had been at a home in Tinley Park, 25 miles southwest of Chicago, just hours before police SWAT teams stormed it. A law enforcement official said the home was that of Conley's mother and that after the woman refused to let the escapees in, the men used a rock to break a window.
The person, who was not authorized to discuss the investigation so would speak only on condition of anonymity, said authorities also searched the home of a former girlfriend of Conley in nearby New Lenox, where the escapees had eaten breakfast.
In Orland Park, which borders Tinley Park, police Chief Timothy McCarthy said records revealed Conley had been arrested several years ago on a robbery charge.
"We looked at our own files and came up with a former colleague, a past associate," he said.
Orland Park officers helped search a house where the associate lives or once lived, he said, but there was no evidence the escaped inmates had been there.


But the chain of events illustrates just the kind of thing investigators are doing: looking through records, arrest reports and even traffic tickets in the hopes of finding where the men went.
Authorities have not said exactly how many people are involved with the search. But the entire 35-member staff of the U.S. Marshals Service's Chicago office was involved, a show of force that spokeswoman Belkis Cantor said "was rare."
Many questions remained about how the two managed to pull off such an escape from the federal prison in the heart of downtown Chicago. At the top of the list is how they could have smashed a gaping hole into the wall at the bottom of a 6-inch wide window being heard or seen by correctional officers.
Another question is why, in the federal facility that houses some 700 inmates, the correctional officers didn't notice the men were missing between a 10 p.m. headcount and one at 5 a.m.
A guidebook for jail inmates indicates there would have been headcounts at midnight and 3 a.m. But inmates aren't required to stand for those headcounts, only for ones at 4 p.m. and 10 p.m. It's unclear if guards may have been fooled by items the FBI said the men stuffed under their beds to make it appear they were there.
It's also unclear what happened between when authorities have said guards first realized the men were missing and when the rope was spotted at 7 a.m.
Authorities also have not said how the two men managed to collect 200 feet of bed sheet or how the broke through the wall.
The escape bore a striking resemblance to one at the same jail in 1985. In that case, convicted murderer Bernard Welch and an accomplice, Hugh Colomb, smashed through a window with a bar from a weight set and used bed sheets and an electrical cord attached to a floor buffer to descend six stories to the ground.
William Rollins, a Washington, D.C., police detective at the time who was brought in by the U.S. Marshals Service to investigate, said the noise of breaking the wall would have been deafening. But he thinks other inmates would have gladly made a lot of noise to drown out the sound.
"They will lure a guard into the laundry room and have all the dryers going," said Rollins, now retired, whose investigation is included in a book about Welch by Jack Burch and James B. King called "Ghost Burglar."
Not only that, but he said his investigation revealed that inmates had hidden hacksaw blades in ceiling tiles and drill bits in bed frames.
"And they used a vacuum cleaner motor to power the drill bit," he said. "These guys are really creative."
Rollins said it's likely Conley and Banks are still in the area. The vast majority of escapees don't stray too far, he said.
"They stay where they feel comfortable in that environment," he said.
Posted by Ambang Crystal at 19:00