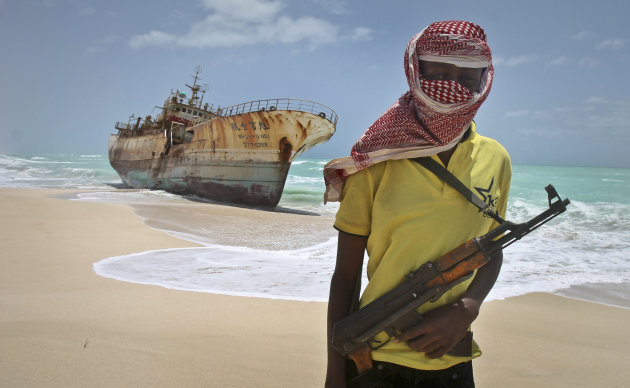 NAIROBI - A dozen soldiers guarding a North Korean ship impounded in Somalia's autonomous Puntland region for maritime violations have hijacked the vessel and its 33 crew, government and naval sources said on Wednesday.
Puntland had been the epicenter of Somali piracy but the use of armed guards on ships and a concerted crackdown by international navies has seen the number of successful pirate hijackings fall in 2012.
MV Daesan, a North Korean ship ferrying cement to Somali capital Mogadishu, was impounded and fined last month by Puntland authorities who accused it of ditching its cargo off Somalia's coast.
The ship dumped the cement into the ocean because it had been rejected by importers in Mogadishu, who claimed that the cement was wet and unusable, authorities said.


However, a government source told Reuters a dozen soldiers guarding the vessel hijacked it on Tuesday night. It was now at sea, destination unknown.
A naval source at the port of Bosasso, near where the ship lay seized over the past month, confirmed the claim.
"The government is preparing troops to rescue the ship," the naval source said.
In 2005, Puntland's naval forces hijacked a Thai fishing boat and demanded an $800,000 ransom for its release, according to Jay Bahadur, a Canadian author of a book on Somali piracy.
About 136 hostages taken in the Indian Ocean off Somalia are still being held captive, but the number of hijackings of ships has dropped to seven in the first 11 months of this year compared to 24 in the whole of 2011.
Posted by Ambang Crystal at 19:05