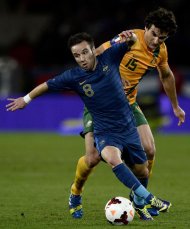 With results elsewhere Friday guaranteeing France a World Cup qualifying play-off spot, Les Bleus tackle Finland in their final Group I match at the Stade de France on Tuesday with another challenge altogether.
A poll published on Sunday in Le Parisien newspaper found that 82 percent of French people have a "bad opinion" of the national football team while 54 percent expect them to fail in their bid to reach Brazil next year.
While France's bid to reach the global footballing showpiece is likely to rest on a two-legged play-off clash in November, barring an unlikely Spanish defeat to Georgia on Tuesday, it seems Didier Deschamps's players face an infinitely tougher task in winning over the hearts and minds of their countrymen.
It is the personalities of the players who infamously refused to get off the team bus and train one day during the 2010 World Cup in South Africa that still irks the French public.
It seems they have not been forgiven.
Judged unpleasant (85 percent), overpaid (86), individualist (84), talentless (76) and vulgar (73), it seems almost as if the French public would rather see their national team fail.
And yet it can't all be doom and gloom as six million people tuned their televisions into a festival of attacking and creative football as France dismantled Australia 6-0 at the Parc des Princes on Friday.
Yet even then, on what was supposed to be a celebratory evening, there was more than a hint of the antagonistic relationship between players and fans.
Star forward Karim Benzema was jeered more than cheered when he entered the fray as a second-half substitute for Olivier Giroud, paying for a run of 1,222 minutes without scoring in the blue shirt of the national team.
When he did find the net, six minutes after his introduction, he did seem to be forgiven his previous profligacy.
Marseille playmaker Mathieu Valbuena was roundly booed every time he touched the ball, paying for his association with the fierce and bitter rivals of the host club at the Parc des Princes, Paris Saint-Germain.
Valbuena, though, failed to let the moment pass and his reaction could only serve to further tarnish an already strained relationship.
"Not much affects me. You have to forgive them, maybe they thought Paris were playing," said the diminutive midfielder after the game.
"You can't turn idiots into intelligent people. It's a shame because when you're wearing the France shirt they should get behind us, but it doesn't bother me."
Perhaps it wasn't just a case of Valbuena being a Marseille player in PSG's stadium, though, as the Le Parisien poll suggested.
When asked which of six star players was their favourite, the respondees shunned the likes of Valbuena, Benzema, Franck Ribery, Samir Nasri and even Blaise Matuidi, plumping instead by a wide margin for Tottenham's low-profile goalkeeper Hugo Lloris.
A sign perhaps that it was more of a vote against the limelight-seeking superstars rather than for the humble and understated goalkeeper.
With six goals in their last match, and four in the second half of their 4-2 win in Belarus in their most recent World Cup outing, France will hope to continue their recent effectiveness in front of goal against the limited Finns and pray that that can help turn the tide of public opinion in their favour.
It would be too much to hope for Georgia to win in Spain, but another handsome victory and an impressive display in the northern suburbs of Paris will at least provide Les Bleus with a confidence boost ahead of the play-offs, in which they could potentially face Portugal or England, just as easily as Hungary or Iceland.