Amnesty documented cases of Turkish riot police firing plastic bullets and tear gas canisters at the heads of protesters. It also accused police of sexually abusing female demonstrators and of severely beating and shooting protesters with live ammunition, resulting in the deaths of two men in separate incidents.
The report, released Wednesday, focused on the turmoil that erupted in May and June, when police tried to put down an environmentalist sit-in. Demonstrators had staged an Occupy Wall Street-style protest over government plans to demolish Istanbul's Gezi Park and replace it with a shopping mall.
"The levels of violence used by police in the course of Gezi Park protests clearly show what happens when poorly trained, poorly supervised police officers are instructed to use force -- and encouraged to use it unsparingly -- safe in the knowledge that they are unlikely ever to be identified or prosecuted for their abuses," said Amnesty International's Turkey ex 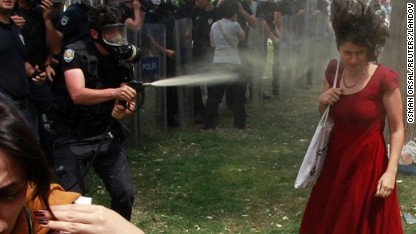