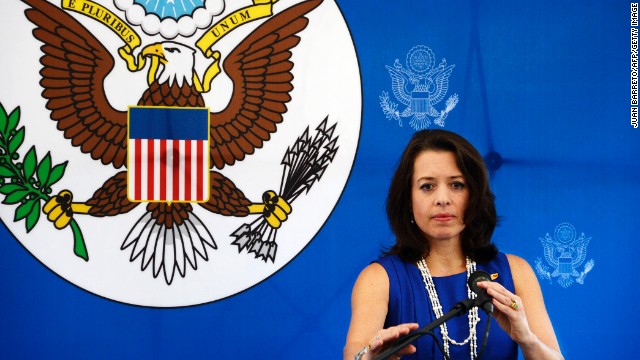 Calixto Ortega, Venezuela's charge d'affaires in Washington, and two other diplomats have been declared personae non gratae in response to Venezuela's decision Monday to expel three U.S. diplomats, a State Department spokesperson said in a written statement provided to CNN.
They have 48 hours to leave the United States.
On Monday, Venezuelan President Nicolas Maduro announced he was expelling three U.S. diplomats and accused them of conspiring to destabilize his government.
The Venezuelan leader accused the group of diplomats of meeting with right-wing political opponents of his government, financing their activities and encouraging them to sabotage the country's electrical system and its economy -- accusations that the State Department has repeatedly denied.
"It is regrettable that the Venezuelan government has again decided to expel U.S. diplomatic officials based on groundless allegations, which require reciprocal action. It is counterproductive to the interests of both our countries and not a serious way for a country to conduct its foreign policy," the State Department spokesperson said Tuesday. "We completely reject the accounts of the Venezuelan government about any participation of the U.S. government in any type of conspiracy to destabilize the Venezuelan government."
In addition to Ortega, Monica Alejandra Sanchez Morales, second secretary at the Venezuelan Embassy in Washington, and Marisol Gutierrez de Almeida, Venezuelan consul in Houston, were also expelled.
The U.S. announcement came hours after Maduro repeated his accusations in a nationally televised broadcast, showing what he said was security camera footage that showed the U.S. diplomats meeting with members of the opposition.
As she prepared to leave Caracas on Tuesday, the top U.S. envoy told reporters the meeting was part of the U.S. Embassy's typical approach of talking with officials and members of civil society throughout the country.
"If we are not talking with these people, then we are not doing our jobs," said Kelly Keiderling, the U.S. charge d'affaires in Venezuela. "If the accusation is that we met with Venezuelans, then we are guilty."
In March: U.S. expels 2 Venezuelan diplomats
Posted by Ambang Crystal at 01:09