Iron Dome is being credited with protecting Tel Aviv and other Israeli cities by blocking some of the rockets fired from Gaza.
Over the past three days, 737 rockets from Gaza were fired upon Israel: 492 landed, but 245 were intercepted by the system, Israel Defense Forces said Saturday.
What is it? 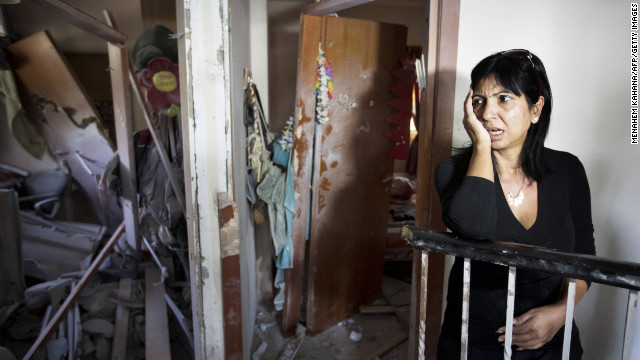 PLO: They are killing civilians

Israeli Amb.: We are ready

Israel braces for a ground war

Racing for cover in Israel
The name Iron Dome evokes an image of a protective bubble over a city. In practice, Iron Dome is a defense against short-range rockets and mortar shells: the system targets incoming rockets and fires an interceptor missile to destroy them midair.
Each battery has a firing-control radar to identify targets and a portable missile launcher. The system is easily transportable, with just a few hours needed to relocate and set up.
The missile is highly maneuverable. It is three meters, or almost 10 feet, long; has a diameter of about six inches; and weighs 90 kilograms, or 198 pounds, according to the security analysis group IHS Jane's.
The warhead is believed to carry 11 kilograms, or 24 pounds, of high explosives, IHS Jane's said. Its range is from 4 kilometers to 70 kilometers -- or 2.5 miles to 43 miles.
What the violence means
What are the origins of Iron Dome?
Israel began developing the ground-based system in 2007.
After a series of test flights in 2008 and 2009, the first deployment of a battery occurred in southern Israel in 2011, according to IHS Jane's and the IDF. The Israel Air Force reported an interception success rate of 70% in 2011, IHS Jane's said.
Israel credits "breakthrough technology" and the system's radar. Iron Dome confronts multiple threats simultaneously, in all weather conditions, the Israeli military said.
"The radar detects a rocket launch and passes information regarding its path to the control center, which calculates the predicted point of impact," the IDF said. "If this location justifies an interception, a missile is fired to intercept the rocket. The payload of the interceptor missile explodes near the rocket, in a place that is not expected to cause injuries."
Each Iron Dome battery costs $50 million, IHS Jane's said. A missile costs at least $62,000, Israeli officials said.
iReport: Photos from inside the protests in Israel
Is the United States involved in Iron Dome?
Yes.
The initial development was solely by Israel's defense technology company Rafael, but the system has since been heavily sponsored by the United States.
In May 2010, the U.S. House approved a plan to allocate $205 million for Iron Dome. In July, President Barack Obama announced $70 million in U.S. funding.
"This is a program that has been critical in terms of providing security and safety for Israeli families," Obama said of the system. "It is a program that has been tested and has prevented missile strikes inside of Israel."
Beginning of ground attack?
How important is Iron Dome?
Israel has deployed five Iron Dome batteries, but in March, a defense ministry official told CNN that Israel would need up to 13 batteries to cover all its borders. Israel plans to deploy a total of nine batteries by 2013, Israeli media reported.
The system is considered a game changer, Israeli officials said earlier this year.
"Eliminating the ability to hit strategic targets may lead Hamas to rethink the efficiency of acquiring the rockets it has used in the past," former Israeli ambassador to the United States Dore Gold said in March.
Prime Minister Benjamin Netanyahu said that same month: "The Iron Dome system has proven itself very well and we will, of course, see to its expansion in the months and years ahead."
Other countries have expressed interest buying the system, including the United States, South Korea and several NATO countries in Europe with military forces in Afghanistan, the Jerusalem Post reported in March.
Posted by Ambang Crystal at 23:23