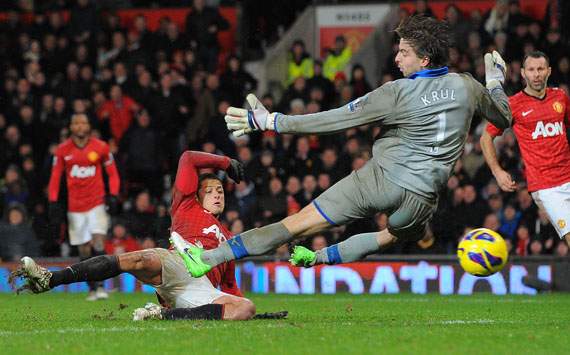 Newcastle went down 4-3 at Old Trafford in the Boxing Day fixture but what a match to savour for all, losing party included.

7 goals, an injury time winner and a shock scoreline. Two out of those three components were the result of Newcastle United's endeavour with Manchester United's contribution being the injury time winner.
How cliched.
How many times has that happened this season? The last time I penned something on Manchester United the tally stood at four, and that was right after the Manchester derby just over two weeks ago when a Robin Van Persie injury time winner won the game after the hosts had clawed back from a two-goal deficit.
So what are the odds the Red Devils would pull a similar stunt again? Pretty low apparently. Javier Hernandez's 91st minute winner against Newcastle was the fifth such event for his side in the league this season from 19 games.
But I'm sorry Manchester United fans, the excitement on Wednesday night came not from the winner, that has been done to death, but from the surprisingly swashbuckling play of a Newcastle side so out of form that they are fighting a remote relegation battle.
The Magpies have not won at Old Trafford since 1972/73 when goals from John Tudor and Stewart Barrowclough earned a 2-0 win. The last 10 years have been miserable no less, with a few exceptions. The 5-3 defeat in 2002/03 when both sides were in the title chase, the 1-1 draw in 2008/2009 when Newcastle ultimately fell through the trapdoor.
The latter at least ended the goal drought at Old Trafford and inclusive of last night's fixture, started a trend of closely fought matches.


But even a fan of over 15 years like myself was willing to settle for a drubbing of less than three goals before kick-off last night especially given that the side was missing at least half of the regular first team players. A Tweet from a friend to keep faith was encouraging but hardly convincing.
And then James Perch scored. His first in Newcastle colours. Suddenly the improbable seemed likely. For about five minutes or so.
Evans grabbed an undeserving equaliser and then promptly showed us why he's a terrible defender and he goes both ways by putting through his own net from former Red Devil Danny Simpson.
Now, many a times, officials have shirked their duties at Old Trafford, but kudos to Mike Dean for making a brilliant call in allowing a goal that his clueless assistant had ruled out for offside.
It should have been 3-1 going into the break if not for the crossbar stopping Sylvain Marveux, another fringe player mind you, but instead the home side converted from their first shot of the second half to draw level again.
For the first time in a long time, a Premier League match at Old Trafford saw a visiting side take the lead for a third time, as Pappiss Cisse suddenly found his goalscoring touch to convert from another former Manchester United player, Gabriel Obertan (also a fringe player).
Sloppy defending allowed Van Persie to grab an equaliser and then as Sammy Ameobi struck the upright, Manchester United scored an undeserving winner from Hernandez. Although granted he did waste a golden chance from close range moments earlier.
4-3 and three points for the League leaders who are now seven points clear at the top, but the pure entertainment value of the match is what needs savouring.
Football isn't about winning, it's the ups and downs that fuel the passion of supporters. The joy of victory mixed with the sorrow of defeat, makes for a lethal addictive combination of loyalty and passion.
If you're a fan of a certain club because they win all the time then you haven't felt football the way it was intended to be.
Having said that, the ending on Wednesday night was a letdown. It was telling and you could see it coming a mile away. That unfortunately ruined the game as a spectacle.
You see, cliched endings are for sappy romantic comedies. What Manchester United needs is a new scriptwriter because this is getting boring.
Posted by Ambang Crystal at 18:11