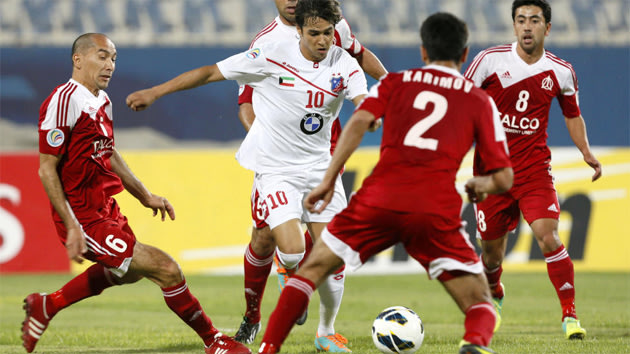 Tajikistan might be up there with Syria and Detroit on your vacation wishlist, but the Central Asian Republic takes its football very seriously.
Earlier this month, Regar-TadAZ defeated top flight rivals FC Vaksh in a Tajikistan Cup semi-final thanks to two goals from Ahtam Hamroqulov. The young striker is a native of the city of Qurgonteppa (where Vaksh is based) and he played for his hometown side up until two years ago.
Clearly, Hamroqulov had no qualms about knocking his old side out of the cup competition with his brace, but representatives of his local utility suppliers felt otherwise. In revenge for his treacherous goals, Hamroqulov's hot water and electricity were cut off for five days. Talk about getting the cold shoulder! Well, the cold shower. Ahem. The Guardian reports:


The striker still lives in Qurgonteppa – which is located in south-western Tajikistan and is the capital of the Khatlon region – and returned to his house there after the match with two Regar-TadAZ team-mates only to be greeted by some unexpected guests. According to Hamroqulov, they introduced themselves as representatives of the city mayor's office and claimed he had failed to pay his utility bills for a couple of months, owing more than $600 to the local authority.

"I always pay my utility bills, 100%, and I keep the receipts," Hamroqulov told Radio Free Europe/Radio Liberty, an international broadcaster serving central and eastern Europe. "So, I told them to take their bills and leave." They did, but only after cutting off the electricity and water supply to the property Hamroqulov shares with his parents. They also reportedly stole the meters.

The head of Qurgonteppa's city water and sewage department insisted that there was no personal agenda in the utility shut-off, but the fact that his services returned shortly after Regard-TadAZ lost the Tajikistan Cup final to Istiqlol seems a little too coincidental.
Posted by Ambang Crystal at 23:28