Napoli's ambition matched by its summer of action

In the late 1980s, Italian football was the realm of Napoli and a certain Diego Armando Maradona. Inspired by El Pibe de Oro, the Partenopei picked up two Serie A titles and won both the UEFA Cup and Coppa Italia in the club's most definitive era. In all, Maradona left an indelible mark on a football-crazed part of Italy that has never forgotten a man who is regarded as a saint in Campania.

You cannot go anywhere in the football-obsessed city of Naples without seeing or hearing the Argentinean's name, even 23 years on from his last appearance in an Azzurri shirt. Yet the decade following his departure witnessed a notable decline in the club's fortunes. Relegation to Serie B happened seven years after he left and it took Napoli two years to return to the top flight, yet something was not quite the same. They no longer had the same allure and only survived one year among Italy's elite before the deterioration continued and saw them drop to the third tier following bankruptcy.

Trying to evoke Maradona-mania in the modern era is ambitious president and film producer Aurelio De Laurentiis, who took control of the club under its new guise of Soccer Napoli (because the third division of Italian football would have been a slur on the club's traditional name) just over a month later. 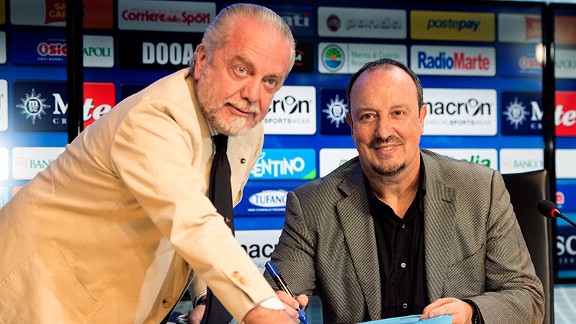 Roberto Salomone/AFP/Getty ImagesNapoli owner Aurelio De Laurentiis and new manager Rafael Benitez have the potential to take Napoli back to the very top.

"I was in Los Angeles finishing off a film with Angelina Jolie, Gwyneth Paltrow and Jude Law when I opened up the newspaper and read that Napoli had gone bankrupt," recounted De Laurentiis at his first press conference as club president. "I didn't know anything about football. I thought systems and tactics meant how to pick lottery numbers." He returned to his Capri home, jumped on his scooter and made his way to Naples where, armed with a blank cheque, he presented the funds required to take control of the ailing club. His six numbers came up that day.

The film producer is famed in Italy for his cinepanettone, or "trash movies," but there is nothing garbage about the team he has formed. In under 10 years, he has lifted Napoli back into Serie A, reinstating their traditional name once they became worthy of it, and overseen their return to the Champions League -- twice. They are now rubbing shoulders and doing deals with Real Madrid and Paris Saint-Germain rather than Avellino and Albinoleffe, and what better way to mark a decade of ownership next September than with a third Scudetto?

Twenty-six years since winning their first Scudetto, Napoli now seem ripe for their third. 76 million euros have been spent on new players and a reported 48.5 million euros are still in the kitty of a club bucking the trend in Italy and throwing their hat into the ring nonchalantly when the world's biggest names are being circulated.

Unlike in other piazze up and down Italy, funds are not lacking in Naples -- though De Laurentiis is not funding the club out of his own back pocket. Astute signings and sales, such as Ezequiel Lavezzi and Edinson Cavani, have yielded enviable profits, while the film producer has used his media know-how to tweak the television market and ensure his club extra riches from pay-per-view preseason games. After all, Napoli fans want to watch their team no matter what the price.

All that dealing has maneuvered the club into the position they occupy now, at the dawning of a new glorious era -- or at least that is the plan.

It perhaps lacked the same weight as Maradona's remarks on July 5, 1984, when he stated his desire "to become the idol of the poor people of Naples because they are like I was in Buenos Aires," but the first words of new Napoli coach Rafael Benitez this summer stirred similar emotions.

"We want to challenge on all fronts and be among the clubs in the hunt for the Italian title," the Spaniard announced. If he can deliver on that promise like Maradona did on his, there will soon be several more heroes in Naples. Benitez has already been declared as the club's greatest signing this summer, although Gonzalo Higuain from Real Madrid comes a close second to the former Liverpool and Chelsea coach who has a proven track record of winning trophies. 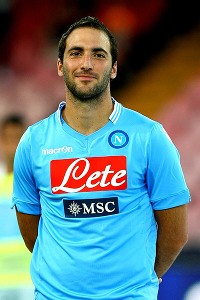 Paolo Bruno/Getty ImagesGonzalo Higuain is hoping to evoke the winning spirit of another famous Argentine in Napoli lore: Diego Maradona.

Greeted by a delirious, packed Stadio San Paolo, the Argentinean forward has already had a taste of what his precursor in the Napoli attack felt. If he finds the back of the net on his debut against Bologna this Sunday, elated fans could create a shock wave capable of triggering an eruption of nearby Mount Vesuvius.

He will be joined in an Azzurri shirt by Jose Maria Callejon, Raul Albiol, Dries Mertens and Pepe Reina. With a few weeks to go before the transfer window closes, they may not even be the last new names at the club.

"Napoli have made and are making their fans dream," commented Italy coach Cesare Prandelli on Sky television. "What they have done is extraordinary. They have raised the expectation levels and they win the Oscar for the best transfer dealings."

Whether that will now translate into trophies is the big question. As Juventus tore Lazio apart to lift the Supercoppa on Sunday night, it became clear once again who will be the team to beat this season. The Bianconeri are still a step ahead with a team that has undergone only minor corrections this summer compared to a Napoli side which, without Cavani, have lost 29 goals from last season and have been transformed.

The city of Naples can nevertheless dream that the Stadio San Paolo will be the scene of Scudetto celebrations once again in May. The legend that is Maradona never expired, it has just been waiting for a sequel, and De Laurentiis is working hard on that script to go into production over the next nine months.
Posted by Ambang Crystal at 01:17